And the award goes to…?

One of the main roles of public relations is crisis management. This relates to how you as a business act and respond to a disruptive situation that can damage your reputation. Some key examples of times when crisis management was needed include disasters like the BP oil spill and the infamous Tesco horse meat scandal.

While these were massive environmental and health and safety disasters, a more minor call for crisis management came just a few days ago during the 2017 Oscars. So let’s talk about how they did.

So, during the 2017 Oscar ceremony “La La Land” was called to receive the award for Best Picture. The cast took to the stage during the usual applause and began the usual speeches thanking family and everyone involved in the movie. What was then unusual, was the interruption during which Jordan Horowitz, producer of the film, took over the microphone and announced that actually they hadn’t won and called Moonlight to the stage. Warren Beatty who made the false announcement, then explained that the card had read “Emma Stone-La La Land,” and that this had caused the mistake. The whole process was altogether awkward and confusing, made no better by Jimmy Kimmel’s following attempts to lighten the mood.

Who was at fault:

Many media outlets took to placing the blame solely with Warren Beatty and Faye Dunaway for reading the wrong film. However, later  focus shifted from the presenters to the people in charge of the envelopes containing the results. This responsibility fell to PricewaterhouseCoopers (PwC) who are in charge of calculating and distributing the results for the Academy of Motion Picture Arts and Sciences who run the awards ceremony.

It was then discovered that Brian Cullinan, chairman of the US board of PwC, was the one who gave Warren Beatty the wrong card, intended instead to announce Best Actress. As two members of PwC are the only ones to know the results during the ceremony, the blame could be placed entirely with them.

However, there is some speculation that the Academy attempted to alter the entrance of the presenters too close to the results, thereby affecting the flow of the whole process and confusing the PwC representatives.

This suggests that both parties were to blame.

So how did they do:

It took exactly two minutes and twenty five seconds for the mistake to be rectified from the time when the wrong announcement was made. This may not seem like a lot but if we instead say that two members of the cast had time to make heartfelt speeches before they were told something was wrong it comes across as a lot more significant.

Moreover, it then took three hours for PwC to release a statement of apology. While this also may not seem like a monumental amount of time, let’s remember that this event was broadcast live meaning that there was no gap between when the mistake was made and when it was discovered.

We sincerely apologize to “Moonlight,” “La La Land,” Warren Beatty, Faye Dunaway, and Oscar viewers for the error that was made during the award announcement for Best Picture. The presenters had mistakenly been given the wrong category envelope and when discovered, was immediately corrected. We are currently investigating how this could have happened, and deeply regret that this occurred.

We appreciate the grace with which the nominees, the Academy, ABC, and Jimmy Kimmel handled the situation.

This was also three hours of silence compared to the previously very active Twitter accounts of the two PwC representatives; activity that only further suggested that they were not paying attention and careless with their roles of handling the results. This three hours allowed media outlets to start placing blame on all parties including the innocent presenters. 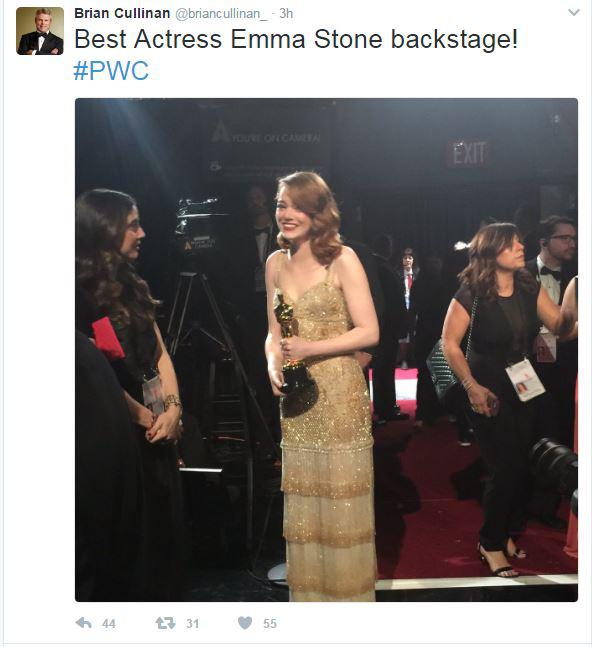 Only after PwC made the statement accepting all accountability did the Academy issue their own apology to the presenters, cast and fans. This significant gap of three hours during which no comments were made by either PwC or the Academy allowed the media to speculate that neither party wanted to accept responsibility. This simply painted both parties in a negative light, furthering the damage done.

Moreover, the crisis was made worse by the fact that it overshadowed the opportunity for positivity on behalf of the Academy. After last year’s #OscarsSoWhite trend which called for more diversity in the awards, the victory of Moonlight would have been the perfect circumstance to highlight for some much needed positive publicity. The fact that this was overshadowed by the new trend #OscarFail made the crisis all the more damaging.

In conclusion, both parties attempted to manage the crisis separately in order to avoid shouldering the blame. It would have been better dealt with if PwC had accepted responsibility while the Academy brought the focus back to the success of the night. A united front accepting blame immediately but emphasising the positives might have limited even more confusion.

Chloe Peoples is a 2nd year CAM student at Ulster University. She can be contacted on Twitter @ChloePeeps or on LinkedIn at http://www.linkedin.com/in/chloe-peoples