Hamilton Not Throwing Away Their Shot …

When writing this blog, I had many ideas in mind.  After sitting thinking about which idea would be interesting for people to read, I decided to write about something that I am huge fan of, and that is the hit Broadway musical Hamilton. Anyone that knows me will know that there is nothing that I love more than Broadway musicals. One of the biggest musicals of the last decade has been Hamilton.  This is a Hip-Hop musical about the American Revolution and it has broken records that no one could have even imagined. Since Hamilton opened on Broadway in August 2015, in the Richard Rodgers Theatre in New York, it has received a record-breaking 16 Tony Award nominations (The Oscars of musical theatre), winning 11 including one for best musical.

So how does a Broadway Musical become so successful? How has it been able to attract millions of people to go to see a Hip-Hop musical about the American Revolution?  How has Hamilton been able to attract people through their doors, from members of the British Royal Family to the everyday theatre-goer? Well, it’s simple – they have been able to use public relations and marketing to make Hamilton one of the most sought-after shows on Broadway.

Hamiltion was created by Lin Manuel Miranda and it is based on the biography of Alexandra Hamilton by Ron Chernow. Lin Manuel Miranda is one of the main factors forHamilton’s success. Having already achieved success with shows like In the Heights, he had a huge fan base amongst musical theatre fans. He was also able to use his social media profile to attract attention for his new show, even before it opened. Once the show opened on Broadway, it soon became a huge success attracting many A – list stars such as Beyoncé and Oprah, to name a few. These stars would then post photos of themselves on social media, thus creating a desire for other people to go see the show.

With the buzz of the show, and the amount of people trying to secure tickets, the show soon made headlines. People where literally willing to pay someone to stand in line at the theatre to try and secure a set of tickets. Trying to get tickets for Hamilton soon became impossible, with tickets selling for up to $1,150. The high price of tickets caused negative headlines for Hamilton, implying that it was impossible to get tickets unless you could afford the huge prices. To manage this crisis, and wanting to make Hamilton affordable for everyone, the Ham4Ham lottery was started where you could enter to win tickets for the show. In addition, the cast would often perform for crowds of people who were waiting outside the Richard Rodgers Theatre to see if they were lucky enough to win tickets. The #Ham4Ham would often be used by people at the show gaining extra social media attention for Hamilton.

With Hamilton gaining so much attention, and not everyone being able to make their way to New York to see it or pay the huge ticket price, there was soon a huge demand for Hamilton merchandise. In this small way, you could get a taste of Hamilton even if you could not make it to the show. Marketing Hamilton means it is more than simply a Broadway show. Hamilton’s soundtrack was charting so well in the iTunes charts that they released a mixtape of the soundtrack, with songs being covered by popular artists such as Sia, Chance the Rapper and many more. There was such a huge demand for Hamilton merchandise that there is even a store in New York to keep up with the demand from Hamilton fans.

Hamilton was soon becoming a cultural phenomenon and was being used to talk about current social issues that were happening in the United States of America.  For example, Hamilton was being used when talking about politics, with the cast even performing for the Obamas at the White House. After Trump was elected President, and with protests breaking out around the country about the policies that he was introducing, many people were seen with posters at the protests that had lyrics from the musical on them such as, “History has its eyes on you” and “Immigrants – We get the job done”. During one of the shows when Vice President Pence was in the audience, the actor who played Aaron Burr, Brandon Dixon, asked Mike Pence after the show finished, and while he was still in the audience, to respect the diversity that the cast represents.  This got widespread media attention as was caught on camera by members of the audience.  Although it received negative reactions from people, including President Trump, many others applauded the cast for speaking out about social issues that were affecting the country and using their platform to educate people about politics. 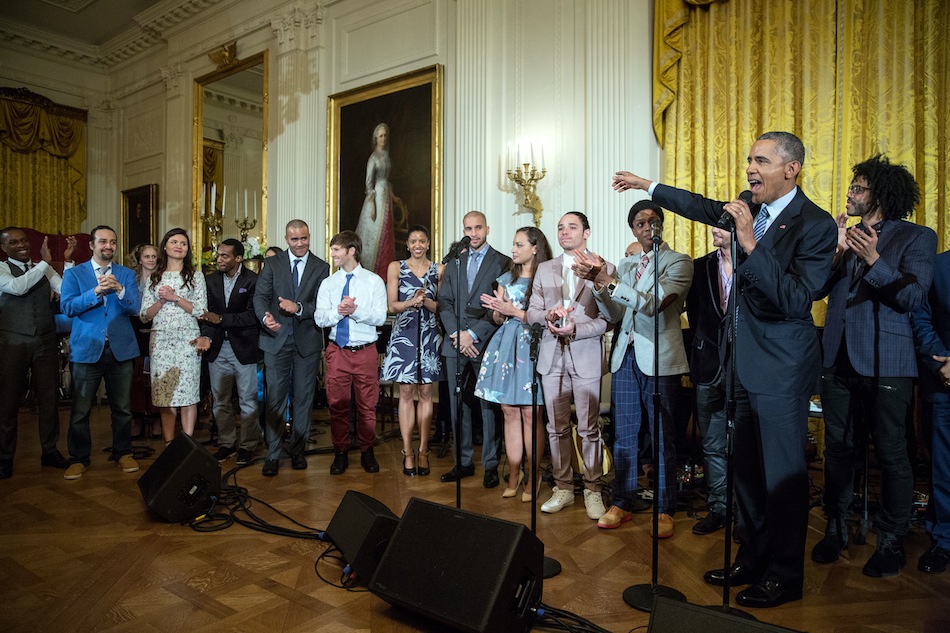 I believe that Hamilton has made Broadway more popular than ever and has succeeded in bringing in a whole new generation of theatre fans.  Hamilton created such a buzz about Broadway musicals that there was even a Broadway Carpool Karaoke with James Corden, which not only included Lin Manuel Miranda from Hamiltion, but other big Broadway stars such as Audra McDonald, Jesse Tyler Ferguson and Jane Krakowski. This has led to the success of many new Broadway musicals such as Dear Evan Hansen, which has achieved similar success to Hamilton.  Hamilton has also helped to change the world of Musical Theatre, attracting new fans and showing that it is okay to break down barriers and change the norm.

Muriosa Houston is a final year BSc in Communication Management & Public Relations student at Ulster University. She can be found at: Twitter – @MuriosaHouston ; Linkedin – http://www.linkedin.com/in/muriosa-houston-32b41413b