What’s the difference between a squirrel and a rat? PR.

The reality of picking a career path from around the age of sixteen that may dictate the rest of your professional life is immense. It’s a regular convention of traditional education in our generation, but just because it’s common doesn’t make it ordinary. This decision process, aided and hindered by influences such as parents, siblings, friends and teachers, tends to divide the teenage population into two categories. A spectrum exists between the two extremities, but more broadly there is one of two responses.

Honourable Mention; Treefish. The Treefish is a student whose intelligence can’t be measured by methods of traditional education. Stemming from Einstein’s famous quote on judging a fish by its ability to climb a tree, this type of student should not be confused with the wasters. I was more of a Don’t Panic. I’m not saying I was laid back, I was closer to the oblivious category than anything else (although I often fancied myself as a bit of a Treefish). I could, with some competence, identify my own internal characteristics. I was better at knowing what I liked about myself than knowing what I could succeed in as a career. I couldn’t picture working in a real job, and I failed to see how any of my personal qualities could transfer to my internalised concept of a professional environment. I wasn’t good with numbers, I couldn’t remember the periodic table and the bandsaw quickly became the banned saw in my case. I had traits – I was relatively hard working from a young age, dedicated, honest. But I never thought I had any skills. I failed to comprehend where I could take little more than a genuine consideration for people and their happiness and make a living out of it. I can’t pinpoint the exact moment that I found out about PR because the truth is, I’m still discovering it. With each revelation about the nature of the sector, I feel confident that I’m on the right track.

So, what makes a successful PR practitioner? (I think):

I’ve always been a good communicator. In every scenario apart from texting my mother to let her know I’ve arrived safe and well, I’ve always been able to get my message across. Such a talent is central to the word of public relations. Tracing back to the 19th century and predating the first recognised PR practitioner (Ivy Ledbetter Lee), diplomat Alvin Adams states “Public relations are a key component of any operation in this day of instant communications and rightly inquisitive citizens”. Communication was, and remains, absolutely vital. If only Adams (deceased 1877) had any idea how his world of “instant communications” might develop. Which brings me on to my next point.

“It is always a risk to speak to the press: they are likely to report what you say”

To succeed in PR, a flair for media is crucial. Definitively, PR was founded on the use of mass media to achieve organisational goals (Duhe, 2007). I’ve always been interested in the capabilities of all media, particularly as it’s developed in the digital age. Figures from Statista (2018) claim that there are 2.62 billion social media users in 2018. To add context to this figure, eMarketer (2017) states that with a global population of 7.63 billion people, 1 in every 3 people is connected online via social media. Subsequently, the impact of recent social media revolution cannot be understated (Kraski, 2017, p.924). A fundamental contrast between traditional mass media and social media is that social media takes the audience from a passive role and centralizes them in the process. The role of social media from a business perspective is a “delicate harmonizing act between users’ trust and owners’ monetizing intentions” (Clemons, 2009, cited by Van Dijck, 2013). If users feel manipulated, they can simply leave the site.

I’ve always had an interest in developing good relationships with those around me. While I perhaps lend myself to it more than I should in some instances, I feel that it’s a trait indicative that I’m in the right line of work. Positive media relations are fundamental to success in any PR role. Additionally, in an age of increasing consumer control, ethical and honest media relations are essential, particularly as stonewalling isn’t as effective as it was in previous generations due to a world of hyper-connectivity and instant communication. If an organisation refuses to converse with the media, the world will quickly know about it and begin to theorise why. Hence, communication should be transparent. This brings me on to my next point.

As discussed in the previous report, many struggle to trust PR as a credible, trustworthy sector. This image comes as a result of the actions of few dictating the perception of all. PR ethics focuses on “the ethical implications of the strategies and tactics that are applied to solve… the problems of organisations” (Parsons, 2016. P.148).

An example is often made of the Philadelphia 76’ers. The basketball team pledged to deconstruct their roster in order to allow for future superstars and success, with the backing of their fans amidst a risky plan. However, lies were publicly conjured about fake trade deals and injuries, and following this realisation, the fans turned their backs. A classic example of how unethical PR backfires.

Satisfying client needs is a key role of PR. But to reference back to Grunig and Hunt’s definition “management of communication between an organization and its publics” (1984), it’s nonsensical to communicate in an unethical manner that has the potential to jeopardise public opinion or trust. As an industry, the level of ethical consideration within PR practice varies. This is not a “if you can’t beat them, join them” situation. In fact, the whole issue lends itself more to Harry Truman’s “If you can’t convince them, confuse them”. Nonetheless, I enter the industry with the plan of being as ethical as possible. 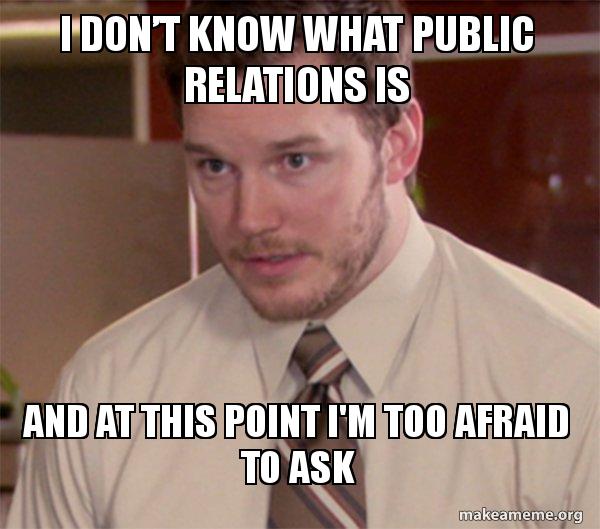 It’s hard to pin down!

Exciting Functions of the Industry

As a profession, PR is fresh and exciting. A personal attraction of the industry for me is the variance in work. From the social elements of networking to the reflective evaluation of drafting a press release, PR doesn’t fit the archetype of a normal desk job.
It’s People-Driven. People skills are easy to overlook. Considering I have them, I plan to use them and PR is the right industry to put these tools to use.
It’s a jack-of-all-trades industry. There is an interchangeability to the industry. It’s near impossible to predict which client l could be working for next, in which industry, or the insights and knowledge I gain along the way. I consider myself as being “pro stuff” and the opportunity to get involved across a variety of industries is quietly inspiring.
The industry is hard to pin down. Some can’t see its value and some feel that its literature is outdated and in need of a revamp. Phoenix Business Review (2018) placed a PR executive 8th in their list of most stressful jobs of 2017. Interestingly, Huffington Post (2012) conducted surveys with Dunkin’ Donuts and CareerBuilder.com and found that PR consumes the second largest amount of coffee annually per profession, beaten only by lab technicians. While all this may lead to to a job that is perceived as stressful, it provides an interesting challenge both existentially and academically. Proper application of one’s self to a career within Public Relations is no doubt trying, but surely rewarding. I intend to find out for myself.