Side note – Originally the title for this blog post was supposed to be; ‘To Blog or Not To Blog’, pretty self-explanatory but I had this idea of creating a post to just address the fact that I have recently been very conflicted with creating blogs (isn’t it ironic, don’t you think?). Writing is something that I really enjoy doing and I would never have started to write blogs (especially blogs that would be published for everyone to read), if it wasn’t a requirement for my final year PR coursework. For this PR work I had to write a series of 3 blogs, incorporating both PR and personal interest, I actually would’ve been quite happy if we had to complete 10 posts as it is work that I just thoroughly appreciate and benefit from in many ways.

Once the coursework was complete, I stopped writing. However, there have been quite a few moments where I have been reading a story or article, listening to music or just watching the news and thought; I could easily write an interesting post about this, especially if it is something that fascinates me! Of course, personal interest posts are what I revel in, I do enjoy PR related writing;  and I am still very much a beginner in that area but it is something I do hope to continue.

Soooo, my apologies if you weren’t interested in any of that, but here goes a personal interest post (which very few of you may actually find interesting in the slightest).

‘The 27 Club’; have you heard of it? if not let me tell you a little of what I know. The 27 club or the Forever 27 Club, was the collective name given to the group of iconic musicians and actors who all passed away at the young age of 27, more often that not this was due to drug and alcohol abuse or violence-related incidents. Although the causes of death are rather varied, does this mean there are no patterns? no connections?, you have to admit; it is a little coincidental. So, if you would like to know which famous names will be forever 27, keep reading; Jim Morrison, Jimi Hendrix, Janis Joplin, Brian Jones, Kurt Cobain, Amy Winehouse, Richey Edwards, Ron ‘Pigpen McKernan, and more.

Personally, when I first heard about the idea of The 27 Club I was immediately hooked and just had to find out more, a deeper meaning; it was all so strange. Is the curse of The 27 Club more than just an unsettling trend? How many more famous names will become associated with this? Are there musicians out there who fear becoming the life claiming 27? (ok that last one was a bit dramatic but shhh). Legend has it that singer/songwriter Amy Winehouse (pictured above) had actually predicted that she, too, would join The 27 Club. Has this myth been talked about so much that it has actually become… dare I say it; GLORIFIED?!

There are many different conspiracy theories that circle the internet today in relation to this coincidental series of events, all ranging from ‘illuminati’, deals with the devil, and even the curse of the white ‘Bic’ lighter (stay with me on this, it’s going somewhere I promise). It had been reported that during the autopsy of a number of these celebrities, a white Bic lighter was found in their possession, and of course immediately these lighters were then said to be unlucky. Maybe you’re even reading this thinking it’s all a load of rubbish;  but I can almost guarantee that the next time you happen to come across a white Bic lighter you will remember this post (probably not but that’s the dream, eh?). 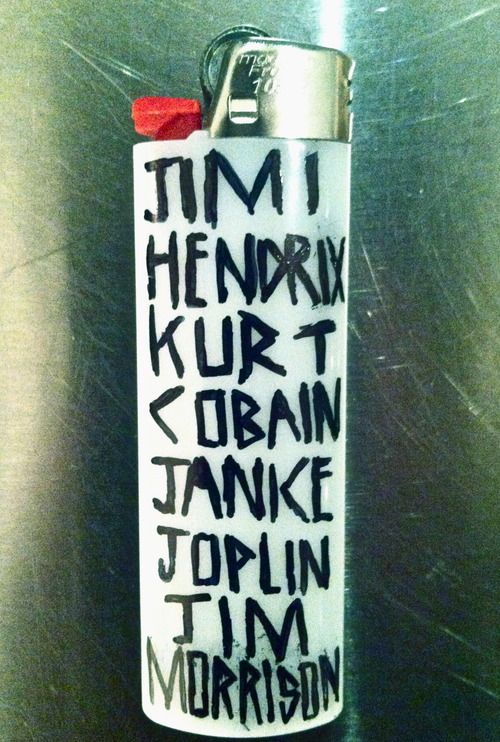 So, was it a case of live fast, die young? all in all there is not much evidence out there to support the fact that this is anything other than a peculiar coincidence, I mean; Bic’s disposable lighters weren’t even produced until 1973, a considerable amount of time after many of these famous deaths. Jim Morrison did famously once say; “whoever controls the media, controls the mind”, something to ponder over. (Maybe he was warning us, ok I’ll stop).

Still, quite a cool theory though! The 27 Club is something that I have known of and thought about for quite a while, maybe this is your first time hearing about it, perhaps you even know more than I do… and although this is likely to be some congregated idea of theories and fantasy – the next time you hear of a musician passing away at the age of 27, it just might send a little shiver down your spine!

Jayne Mullan is a 3rd year BSc in Communication Management & Public Relations student at Ulster University. She can be found on Twitter: @JayneMullan_ and LinkedIn:  http://linkedin.com/in/jayne-mullan-81457415a