“Warm and welcoming is who we are”… is it really?

The events that took place on the 9th of April 2017 at O’Hare International Airport may suggest otherwise. If you do not remember the incident, allow me to refresh your memory; a passenger who was travelling with United Airlines was forcibly ‘dragged’ off the plane by two security officers due to what some may refer to as ‘a common seating problem’. However, this ‘common’ problem quickly turned into an unnecessary act of violence. The passenger who was later named as; David Dao, 69, was returning from a holiday in California with his wife when the incident occurred.

Rather vivid footage of the event flooded social media and news channels in the UK as well as the USA shortly after it took place – a PR nightmare for any large company as we all know how fast word can travel in this day and age; especially news as scandalous as this. Since the incident, many discussions have taken place regarding whether or not the passenger should have been removed in the manner that he was; mainly due to the fact that he refused to give up his seat once the airline had requested 4 of its passengers to vacate the plane in order to have seats available for 4 of its staff members. Could this have  really been a fair argument after this footage? 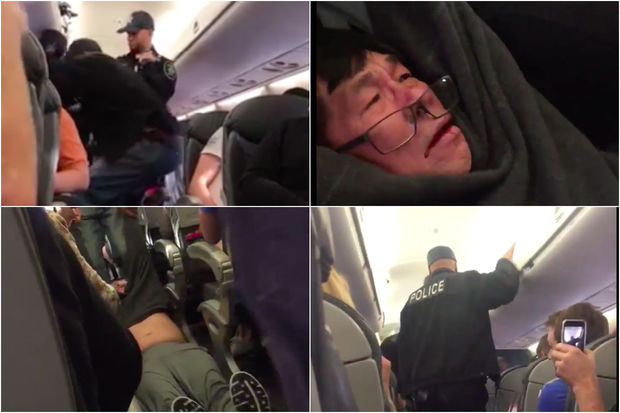 The images shown above are quite shocking, once the footage went viral there was nowhere for United Airlines to run and hide; the proof was clear. Is it ironic that the month before this incident happened, United Airlines CEO Oscar Munoz was named US Communicator of the year by the magazine; PR Week? this was apparently awarded to him for his outstanding communication skills under pressure and ability to ‘engage with employees and customers’, maybe a little too much?

It had been said that the airline obtained the right to forcibly remove passengers where it was deemed necessary, although, only after the appropriate steps had been taken. In which case, the passenger would have had to have been arrested before any physical action should have taken place. The evidence was clear and there was no denying what had happened, so what could the airline do next? blame the passenger of course, CEO Oscar Munoz stated that the passenger was “disruptive and belligerent”, but this cannot justify causing said passenger to end up hospitalized following a concussion and several other injuries, can it?

The immediate response from the airline sparked outrage amongst the public, not helping their image in any way whatsoever, if anything, just making the situation worse for themselves as this initial statement did not include an apology. Not only was there no apology issued straight away, but the CEO then continued to praise his employees for their performance, claiming that they went “above and beyond”. Once an apology was eventually made, the blame was then passed onto the airline’s policies, again proving that this scandal was not handled in the best of ways.

Personally, when I think of the United Airline’s incident; all I can picture is the footage of the passenger, as I am sure this is the case with many. So how does one recover from such a scandal? the smart thing to do would have been to move quickly, apologise and try to put the incident behind them, however, as this was drawn out, it gave the public a chance to respond to the situation in a way that did not reflect well on the airline. See below;

Is there really no such thing as bad publicity? this image may suggest otherwise, perhaps the airline deserves this kind if backlash for their mishandling of the situation. United airlines had already been a hot topic with the public after refusing to allow two teenage girls to board a flight because they were wearing leggings, this incident alone attracted an abundance of criticism, the smart thing to do after this would be to lay low for a short period of time and stay out of the news, but it seems United Airlines were eager to stay in the headlines.

Maybe the scandal has had a positive impact for the airline in the long run, in terms of more publicity, although, it cannot erase the damaging name they have created for themselves. In my opinion, and I’m sure in the opinion of many others; not enough crisis management tactics were implemented in terms of; the first few minutes being critical, taking responsibility, sensitivity to victims and families, and having  a PR director on the crisis team; maybe this incident could have had a slightly better and less damaging outcome for the airline.

All in all, this is hopefully something they can learn from and aim to prevent in the future – perhaps one small positive out of one large catastrophe!

Jayne Mullan is a 3rd year BSc in Communication Management & Public Relations student at Ulster University. She can be found on Twitter: @JayneMullan_